I love traveling, the only drawback is that I can't soap!  But I sure get inspired and come back home eager to put my vision to work, in soap of course. 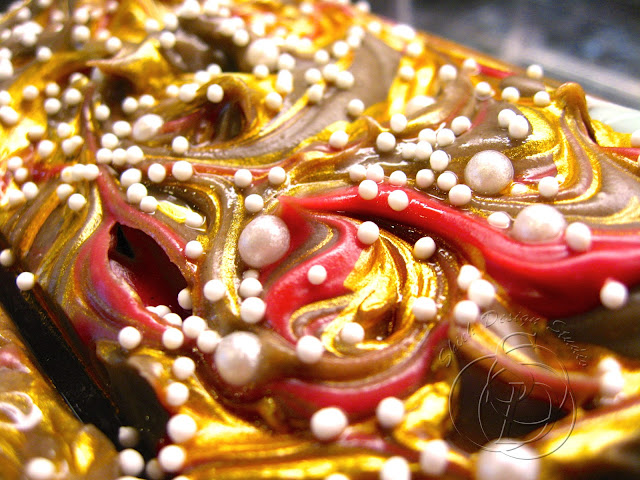 This is my 2nd time traveling to Japan.  The first time I visited it was at the end of summer season rolling into fall, weather was still hot and everything green.  This time we went in the harsh winter.  I love visiting temple, shrine, and castles, not just in Japan but all over the world.  I have a thing for ancient old architecture, it speaks great history and evolution to me.  Temple, shrine, and castles look very different in snowy winter, they are more 'quiet' and serene, as if time freezes at this specific moment. 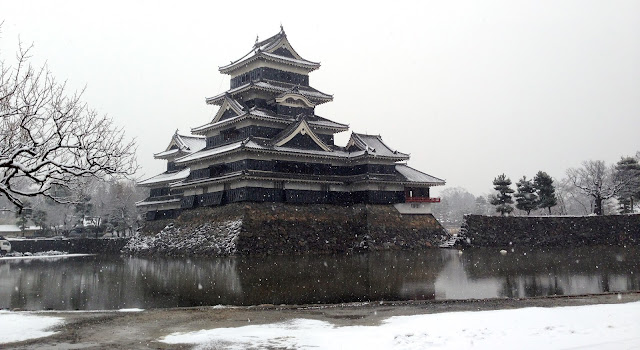 Zenko-ji (one of the oldest Buddhist temple in Japan) 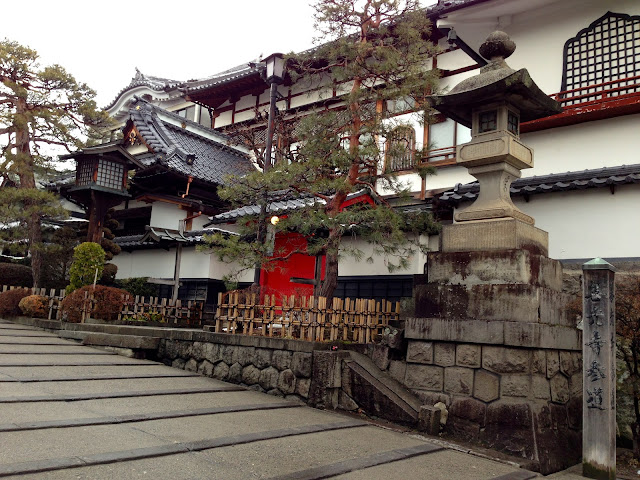 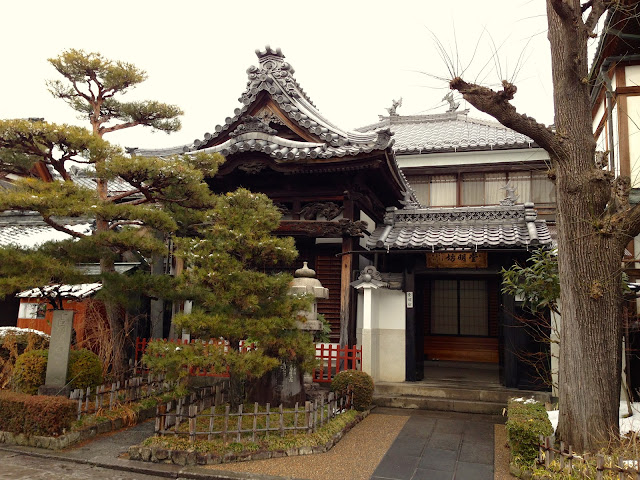 Rokujizō (statues of the six Bodhisattvas, who gave up Buddhist enlightenment, in order to provide salvation to others. The Bodhisattvas are said to be able to commune with the six realms of hell, starvation, beasts, carnage, human beings and divine beings) 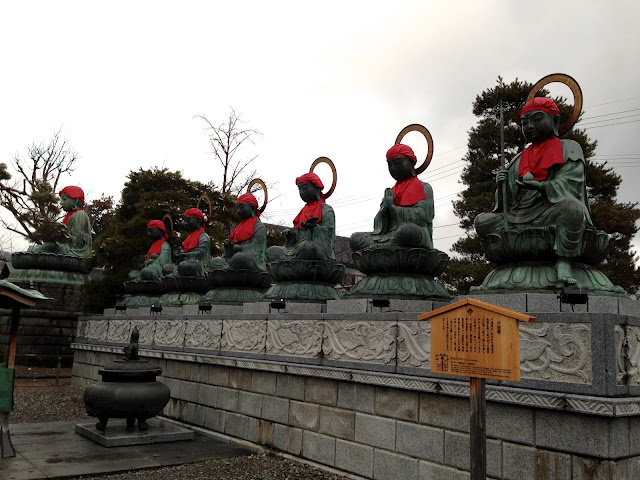 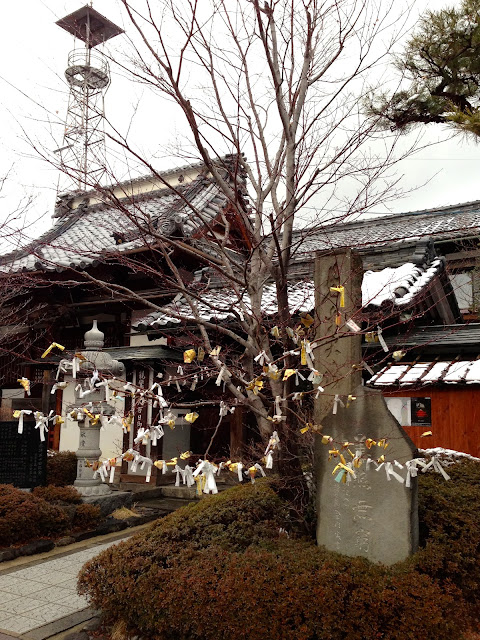 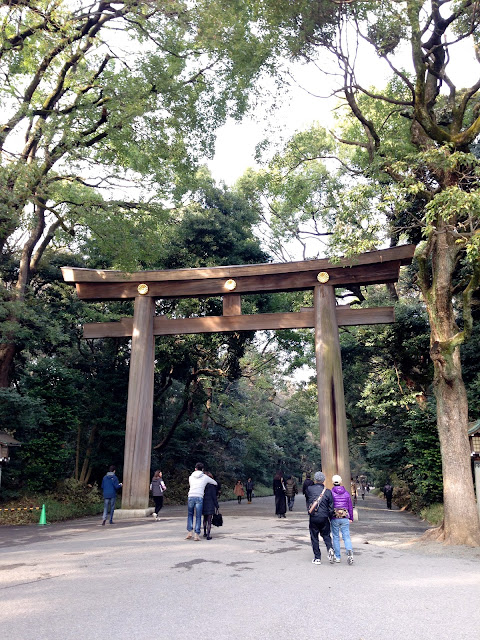 Interesting fact about torii gate: it is meant to mark and divide the spiritual world from our world, it only exists in Shinto shrines.  Shinto shrines supposedly don't exist in our world, shrine ground exists on a place that overlaps the two worlds, a place where the holy spirits are most likely to hear your prayers.

Anyway, the snowy sky with cold air, the rich old aged wood in the buildings, the red door or torii gates, I want to put them all into this soap, ambitious isn't it?!
My husband walked by when I was cutting the soap and his words were: what are you making, evil soap?!  LOL 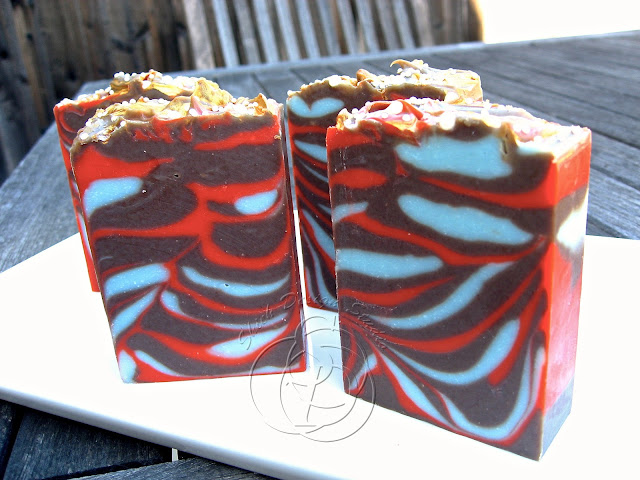 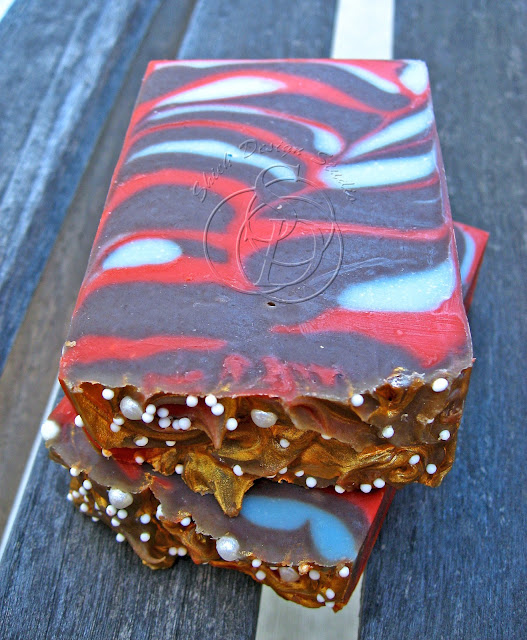 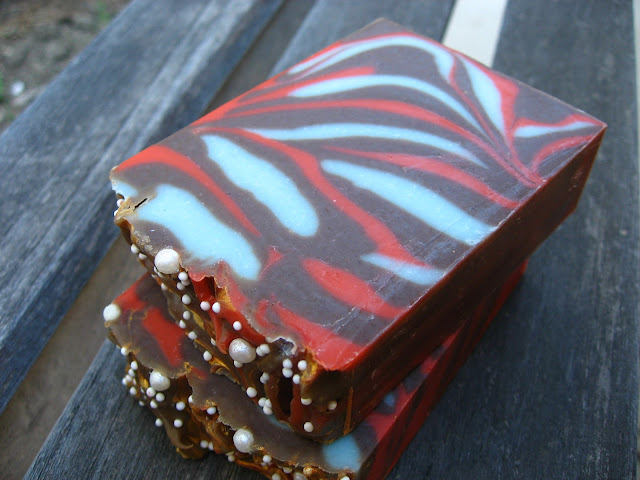 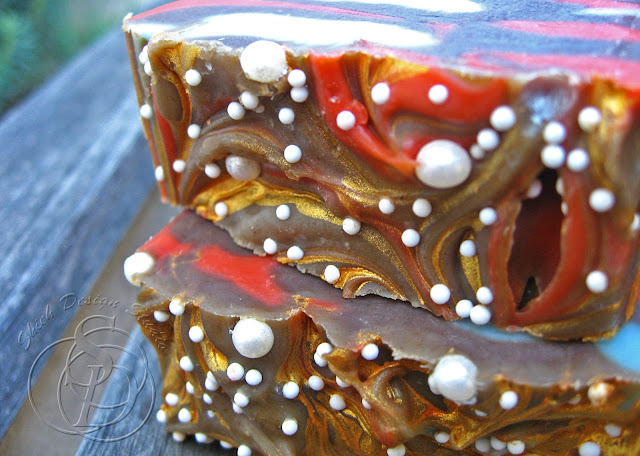 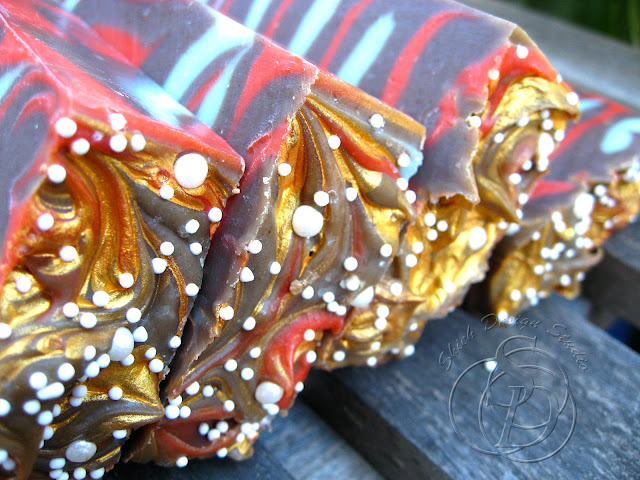 This soap is truly luxury, it has pearl and caffeine powder as that unusual additives.  Plus it's scented with 3 different kinds of fragrances: brown part is a mixture of exotic wood & spices; red part is Japanese cherry blossom; and powder blue is a fragrance called Fresh Snow.
Posted by Shieh Design Studio 10 comments

Journey to the Perfect Pink Sugar

The first time I smelled a small piece of soap (by other) made with Pink Sugar fragrance I really didn't like it at all.  It was way too strong and sickening sweet like I could get hunted down by bees if I walk out of my house wearing it.  I've never smelled the real Pink Sugar perfume by Aquolina, can't really say if it was a dead on duplicate.  But if it was, that would be the worst first impression!  This scent is widely popular that forced me to rethink about my decision of not trying to soap it last year.  This fragrance has one very annoying flaws, it discolors soap to a dark yucky brown and suds brown in the shower too.  My road to search for the perfect Pink Sugar fragrance duplication starts!

I looked and looked online, there are tons of suppliers sell this specific fragrance duplication, almost every bath & body product supplier sells a version of it or more.  They all however have the same warning about discoloration.  Then I heard of one that would not discolor to brown so immediately I bought some to try.
This is how it looked like just poured: 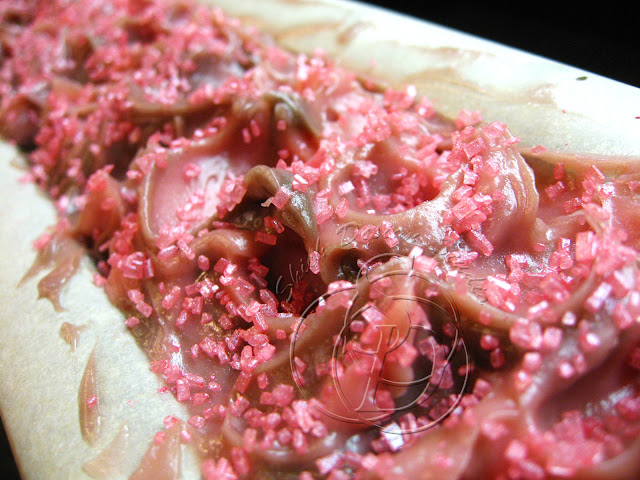 This is what it ended up with after, yellowish: 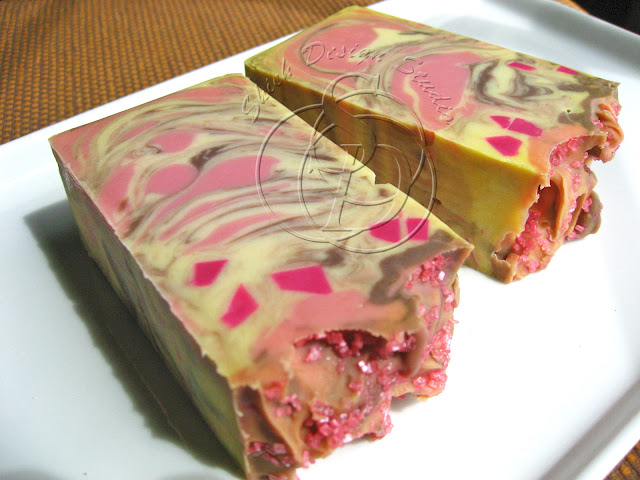 It didn't go dark brown, but is yellow really better than brown?!  Instead of looking like poopy color it's pee color!  And the sweet cotton candy scent faded big time.  If you are a soaper you would know the exact reason why our soap turns brown when soaping with sweet candy or bakery scents.  For none soapers, it's the vanillin in the fragrance that causes the browning.  Vanillin is the synthetic scent for sweet creamy vanilla.  Most of the vanilla related fragrance have vanillin in it more or less.  Obviously this version has much less vanillin that's why it didn't discolor deep but that's the same reason it didn't smell as good as it can be.  So I moved on.
I decidec to soap the typical browning Pink Sugar, this is photo just poured: 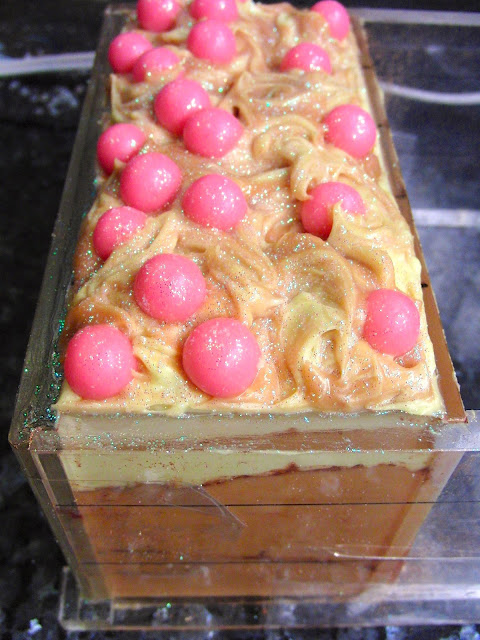 I used browning Pink Sugar for the majority batch and none browning version for the top (I had to add some whitening or I would end up with unpleasant pee yellow).  3 weeks later, wow~ 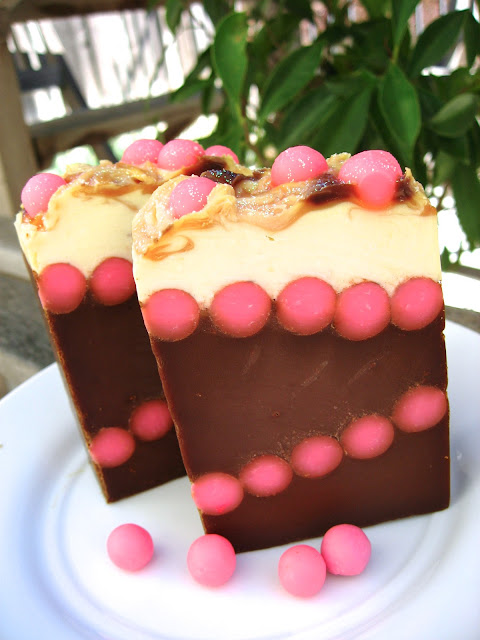 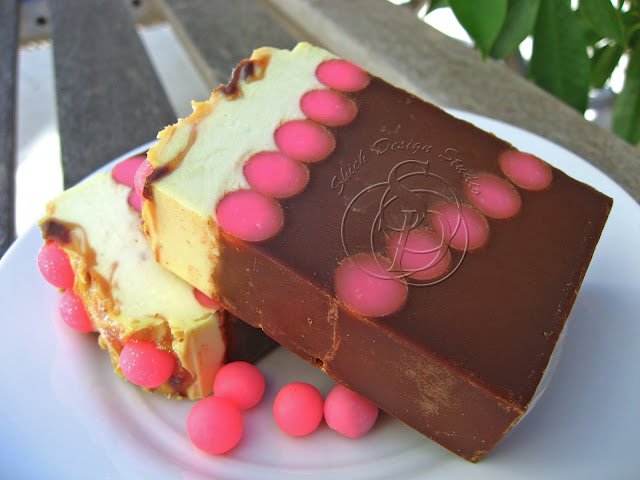 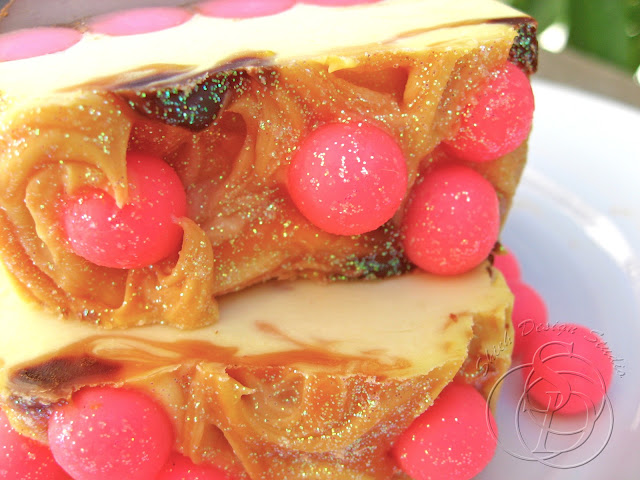 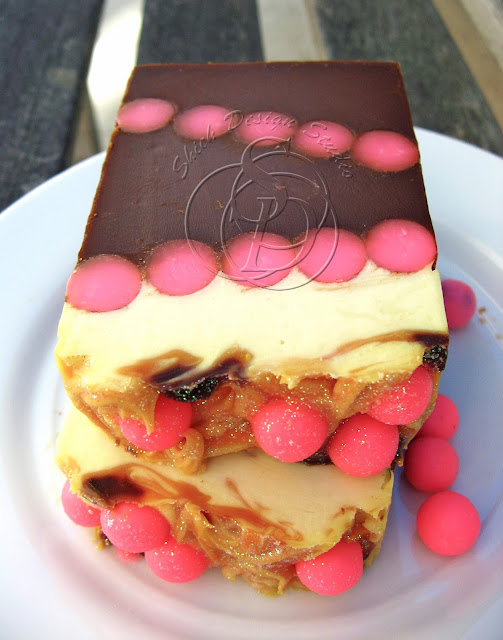 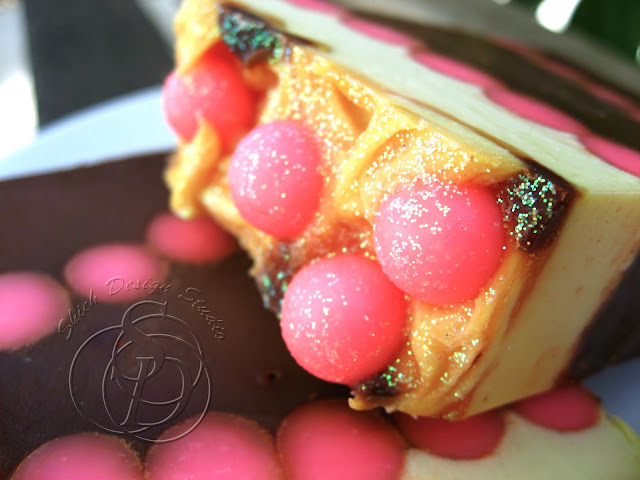 This smells strong but not sickening strong, sweet but with musky undertone.  Go take a closer look and stare at one of the cut photos you will see the pink balls that I made separately (without any fragrance) have this brown edge glow.  This is how strong the vanillin can be!  It's invading anything and everything around it!  I had originally rolled these pink balls in sparkling gold mica before embedding them in the soap.  The vanillin ate the mica and went right into the pink balls like poison!  Oh well, at least it smells damn good!
If you want one, it is listed on my Etsy online shop: Pink Sugar Soap
Posted by Shieh Design Studio 9 comments

Every time I travel I try my best to look out for "local" made natural soap just to experience different culture.  This time I came back from Japan with some commercially made goodies because I had a hard time finding truly handmade soap from scratch.  Maybe I just didn't know where to look, but with limited time these are what I found:

I don't know how to read Japanese, but since it's a language originated from Chinese, I can pretty much guess the meaning by reading the Chinese characters.
The right side big pouch is a 4-pack different scented sulfur bath soak.  The left top black soap is made with some type of charcoal for detoxication.  And the left bottom is a delicate small round facial soap that smells so good I just have to get one even though I only use salt bar for my combination skin face. 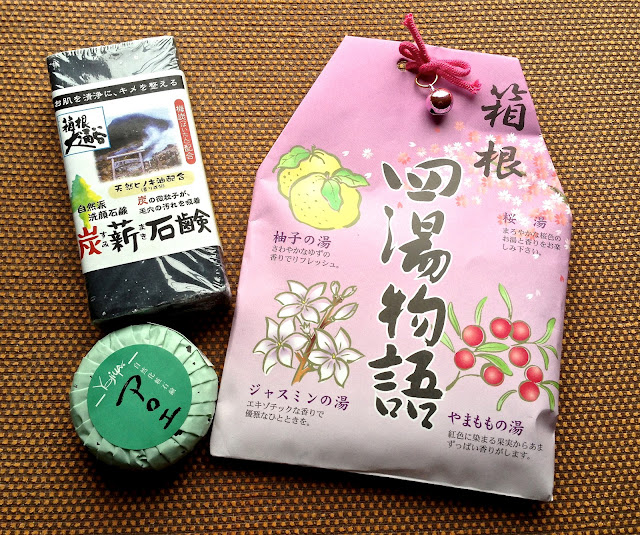 I think these are milled soap since they are commercially made.  I can only recognize some of the ingredients like water, fatty acid, sodium hydroxide, EDTA, fragrance and some dye colorants.  This little round 50g facial soap costed me 200 yen, which is around $2.10 depending on which exchange rate of the day. 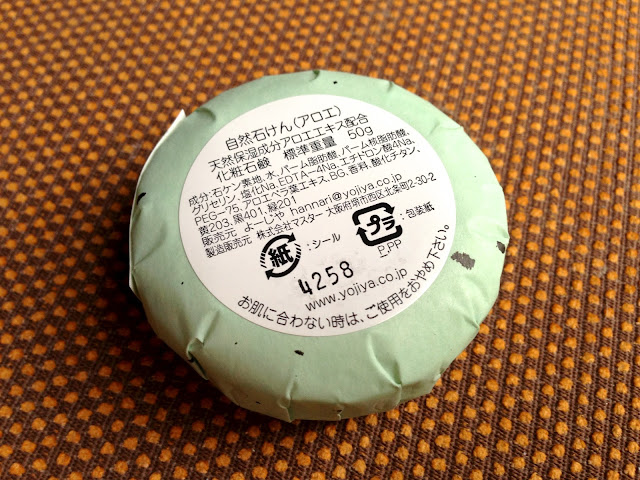 Now this one costed me 700 yen!  But it is one big bar with very similar ingredient list as the facial soap except there's charcoal as colorant and no fragrance added.  I bought it at a famous hot spring town called Hakone by Mt. Fuji. 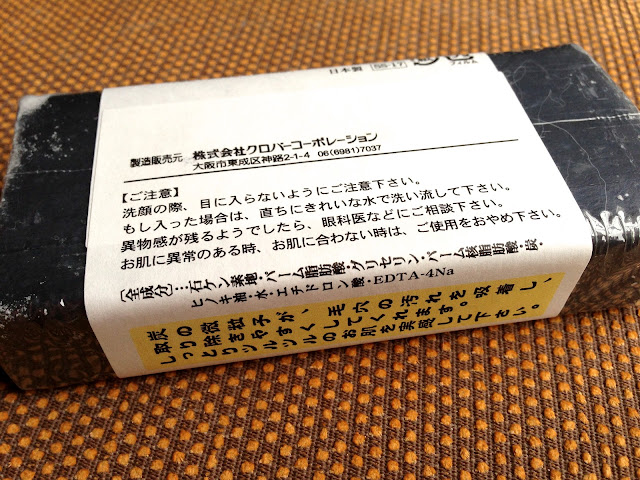 I couldn't wait, I tried one of the soak pouch already, it's the cherry blossom one.  It was very fine colored powder with very strong fragrance added.  one little pouch made my bath water a beautiful medium pink, bubbly and smelled divine.  Unfortunately I don't feel the volcanic benefit at all, it felt just like a regular bath soak, nothing special.  On the other hand the 4-pack only costed me 450 yen, I don't feel so heart broken that it didn't meet my expectation.

I have no idea why and how it evolved in the history of handmade soap but nowadays soap made using animal fats seems to be degraded for it's actual value.  More and more demand for vegan soap in the market these days makes me wonder if consumers really understand what they are insisting.  It has become the rule of thumb that vegan = green and environment save.  But, is it really green?!
Let's ask ourselves how many cow and pigs we slaughtered every year?  And how many pounds of fat those dead animals produce because of our meat consumption? Where would the fat go if no one wants to use it?  There are a lot of pastry made with lard and they taste so yummy.  And I bet a lot of people don't know they are eating lard!  But when they buy a bar of handmade soap they make sure it has no animal fat in it.  Why?!  If no one wants those animal fat it only ends up in the landfill, is it really better for the environment?
I believe in food chain and balanced consumption.  I believe there's ying and yang (Chinese belief that everything has action and reaction, or, for everything that's on the bright side there's a dark side you can't see).  I also believe this world is definitely grey, not black and white.
Anyway, let's talk about soap!  A lot of people might not know that the fatty acid profile of animal fat is closer match to ours than any plant oil or butter out there.  It makes perfect sense to use beef tallow or lard to make soap to use on our own skin.  At least that's my train of thought.  The only reason I don't use lard for soap is because I can smell the stink, like bacon or burned animal fat.  I mean who wants to bath in smelly burned animal fat?!  It defeats the point of "cleansing" right?!  On the other hand I really fell in love with beef tallow in soap.  It produces white hard soap that carries absolutely no smell whatsoever, and the suds are so creamy to the touch!
This is my salt bar which contains beef tallow in the formula and I love it!  So are my customers, which I have no idea if they ever read my ingredient label... 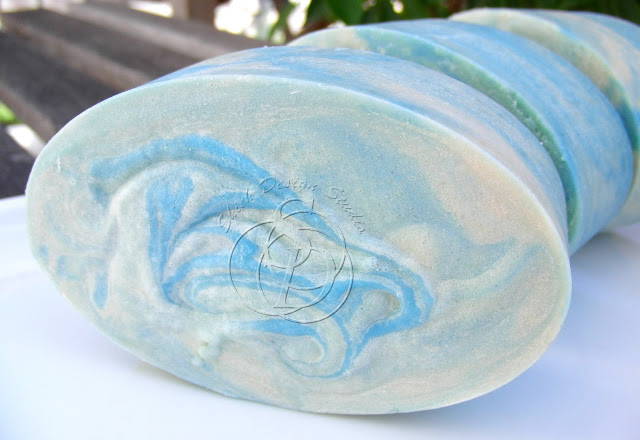 I use long cured salt bar for my face, it makes my skin soft and smooth.

This is my first soap ever made with beef tallow. 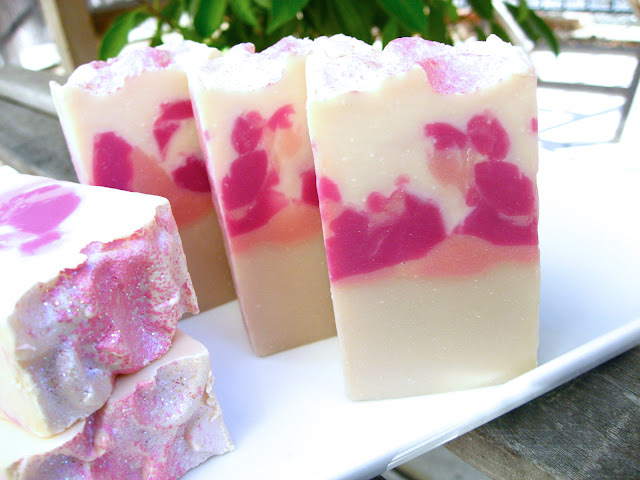 If I don't tell you, would know these soaps were made with beef tallow?!  They smell divine! 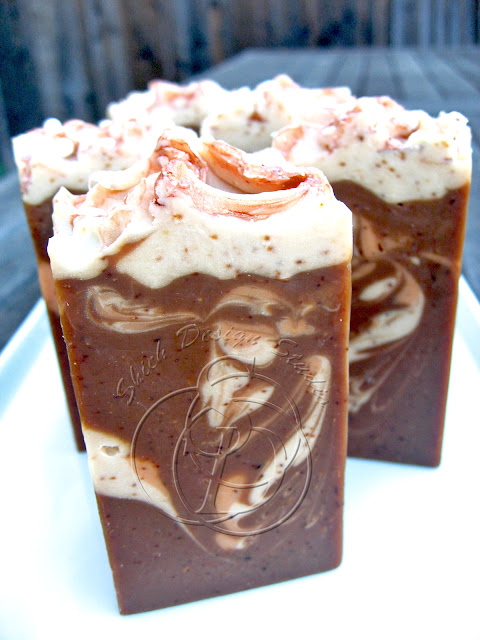 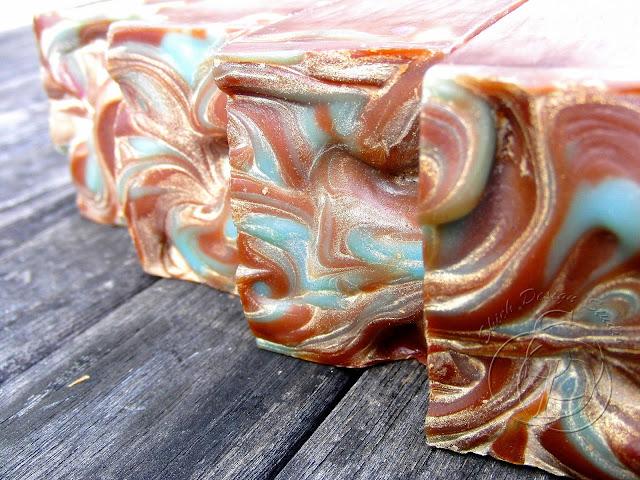 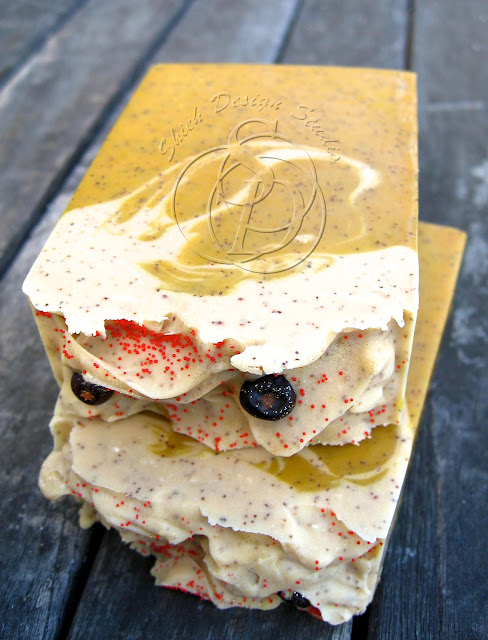 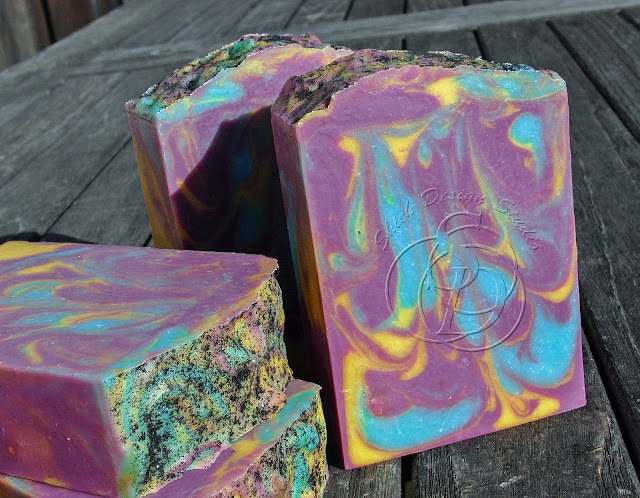 For soapers out there who have not tried beef tallow, tip is to melt the fat with the lowest temperature you can do in order to prevent from burning.  Or you will smell the "bacon"!
Posted by Shieh Design Studio 24 comments