Yes you read it correctly, I did say toning down!
Why?!  I don't know really, just going through cycles.  We are pretty much like the economy, up and down, when it's already at the very top, we got to come down in order to get back up, right?
Simplifying the design is hard for me at the beginning.  I'm so used to plan complicated design, running in my head the possible sequence before actual soaping.  Established habit is hard to change.  In order to not fall into the same routine, I had to force my mind to go blank and just act on instinct right on the spot. 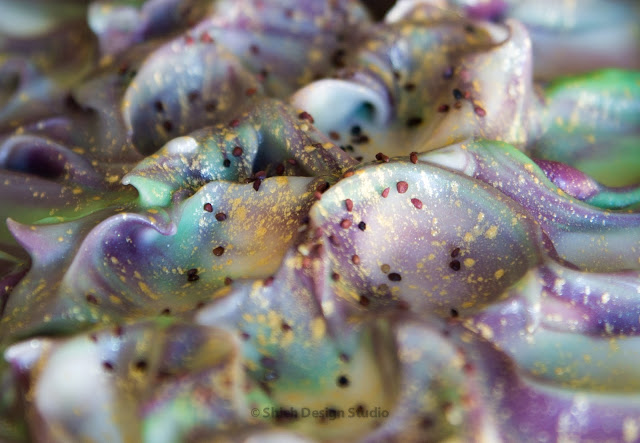 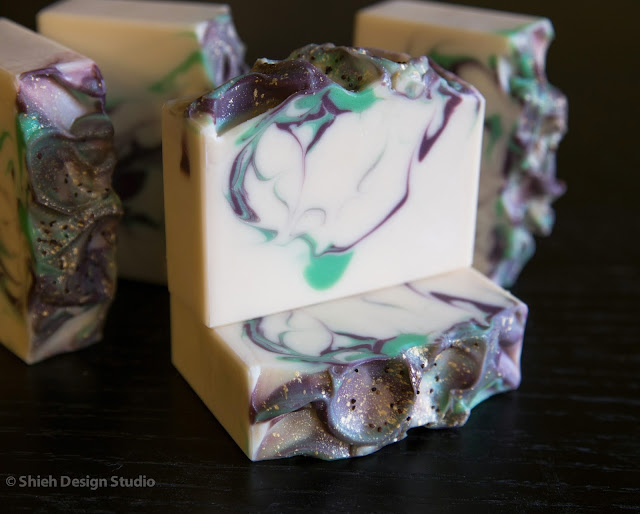 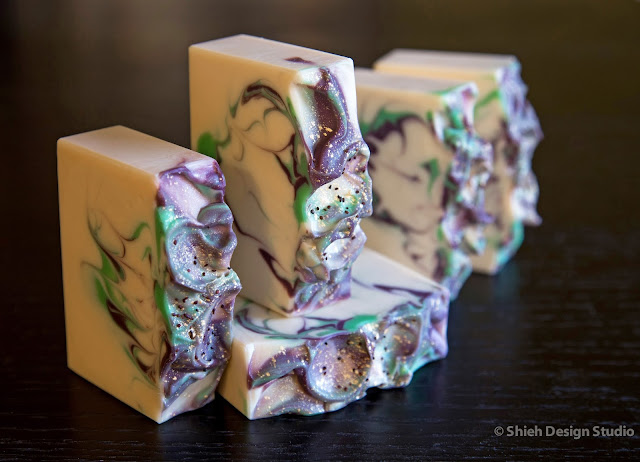 This one started so nicely, I even got a chance to drizzle glycerin glitter on wet soap top: 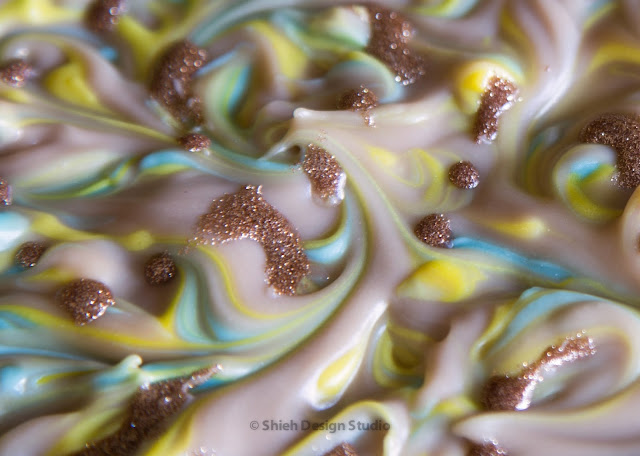 Then I did something stupid...
I took too long to take photos of the wet soap that the bottom of the log started heating up badly.  I don't like the partial gel effect, that would make uneven color marks.  Once gelling started, you can't stop it, so I helped it with a push, I heat up my oven with low heat and popped the soap in to force gel.  I totally forgot the glycerin glitter on top!  I screwed up the top, again!  Last time I did it was early this year: http://soapandrestless.blogspot.com/2013/01/first-soap-of-year-what-bad-start.html
Seriously, I need to think 3 times before putting soap into an oven next time!  Anyway, the top is ruined, but the inside is actually what I expected. 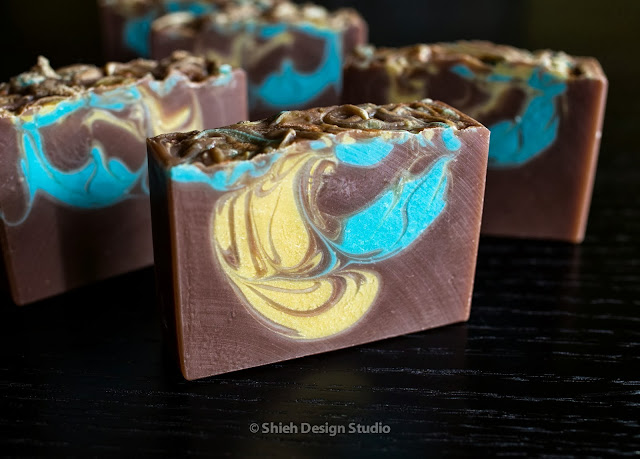 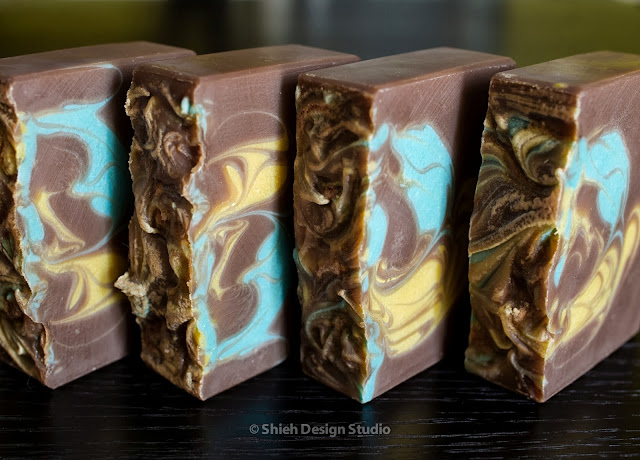 Herbal (or botanical) infusion soap is time consuming.  It starts with infusing olive oil with desire dry herbs or flowers. 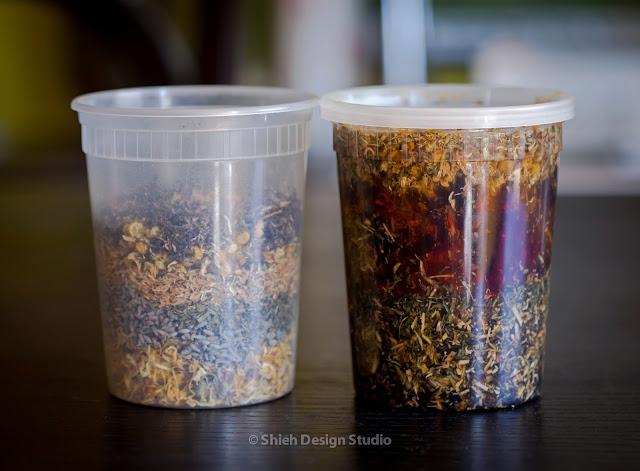 I usually pile up layers of botanicals in a container first like the left bucket, then fill it up with olive oil and let it sit for months in the dark cabinet.  It looks red on the right because the infusion contains alkanet and gromwell roots for natural color.  Typical botanicals I use: calendula flower, lavender bud, mint leaf, chamomile flower, white willow bark, and green tea leaf.  These are all skin beneficial botanicals though I cannot claim any cosmetic or health benefit or FDA would come after me!
Alkanet root produces natural red color for cold process soap.  Gromwell root is typical in Asia, used in herbal remedy and medicine, but it's difficult to find anywhere else. When infusing gromwell root in oil it would look plum red at first, then turns into purple or blue once the lye solution hits. It produces natural color for cold process soap ranging from plum to purple to blue depending on where and when the root is harvest.  This is how my gromwell infused oil soap, 40% olive oil: 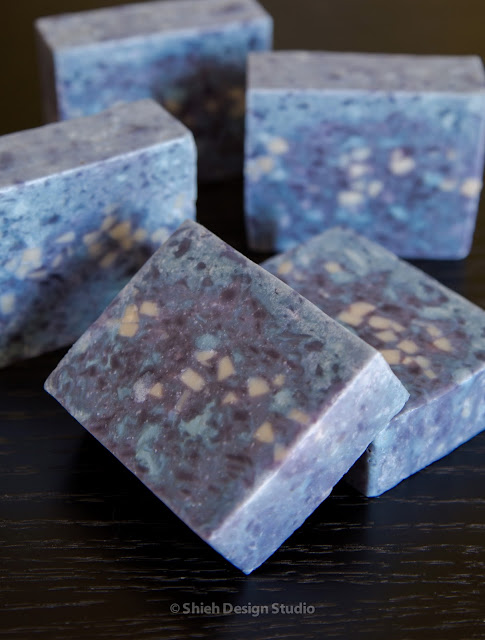 I was hoping to get a real purple but my batch ended up blue...  That's why this time I'm infusing gromwell together with alkanet, maybe next time I will get the purple I want!

Next is a batch of castile soap I made using my herbal infused olive oil.  Castile soap meaning 100% olive oil.  The infused oil came out a pretty dark green, I was hoping that color would survive saponification, but it didn't.  I also pureed fresh mango with heavy cream to make this castile soap even more luxury!  I decided to keep this one unscented, but the natural smell of the botanicals together with the faint but noticeable mango aroma is surprisingly pleasant! 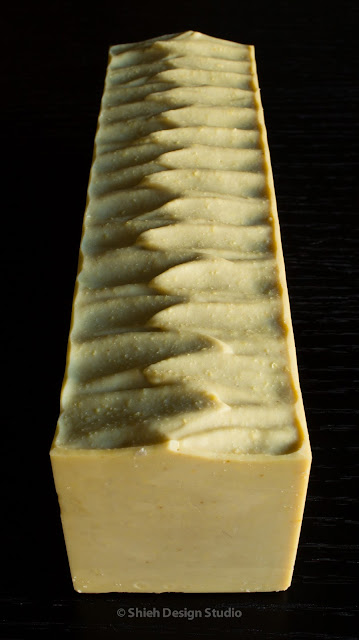 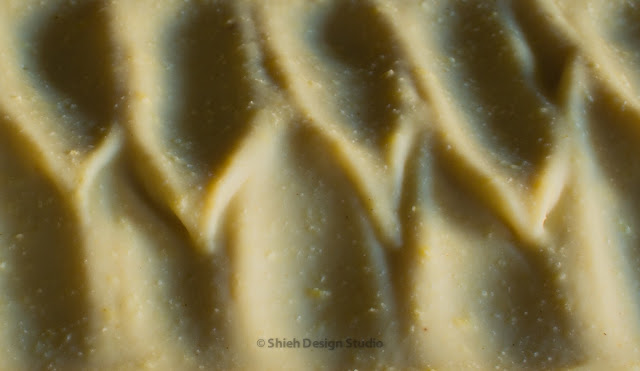 This is my most time consuming soap ever...
Why?  Because it's made with 72% olive oil, organic brown egg, and real Dead Sea Mud (not powder).  It takes at least 9 months to get ready, I only do this once a year. 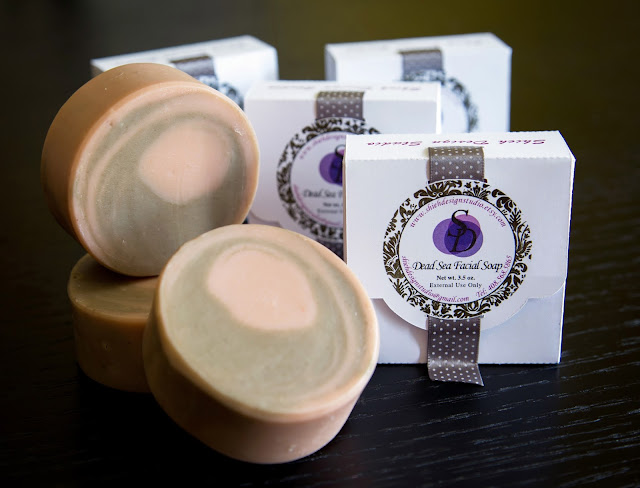 First step, I have to infuse botanicals such as calendula, chamomile, lavender bud, willow bark, mint, and green tea leaf in olive oil for 3 months.
The making of the soap itself is pretty standard except the part I have to temper the egg (both yoke and white) with the soaping oil before mixing with lye solution.  The final stage is the curing.  High olive oil soap needs longer curing time.  It's like wine, the older the better.  I have to confess, I don't like Castile soap (made with 100% olive oil).  Soap made with high % olive oil tends to be slimy, it produces less suds then let's say soap made with coconut oil in the mix.  And it has this slimy stickiness after wash.  Nevertheless, it's well known for its mildness to our skin.  Facial soap doesn't need to have lots of lather, but it needs to be mild, olive oil is by far the best choice in my opinion.  In order to cut down the slimy stickiness I compromised with a bastille soap recipe of my own.  Bastile is soap made with 72% or more olive oil mixed with other oil or butter to boost lather.
Posted by Shieh Design Studio 4 comments

Let's try this again since the 2nd prize winner of my Soap Crafting giveaway never show up.  I've given a week, and that I feel is long enough.  It is not fair to other participants.  I've posted the result on my FB page, on soaping group, asking soapers around and winner didn't contact me.  Until this afternoon, the 1st prize book winner finally emailed me!  Woohoo!
Now as promised, 2nd prize, a bar soap of Pine Fresh made with one of the recipe from the book, had been redrawn randomly by using List Randomizer and Sequence Generator.  And the new winner is:
Ruh! 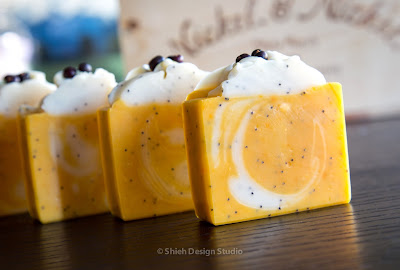 Please email me at shiehdesignstudio@gmail.com and give me your full name and address so I can send you the soap!  I'm going to make this one short, If winner doesn't respond I will redraw on Friday, September 13th, AGAIN!

The Winners of Soap Crafting Giveaway Are...

Thanks for all the participants!  Almost 100 of you!
I used List Randomizer, inputed all names from the comments to generate a random list of numbers, then use a Sequence Generator to draw the 1st prize winner.
The winner for a copy of Soap Crafting book is: Laura D!

Then I added 2 names who just want to win soap, generated another random number list, drew the 2nd prize winner.
The winner for a bar of Pine Fresh Soap is: Sissi Caplinger! 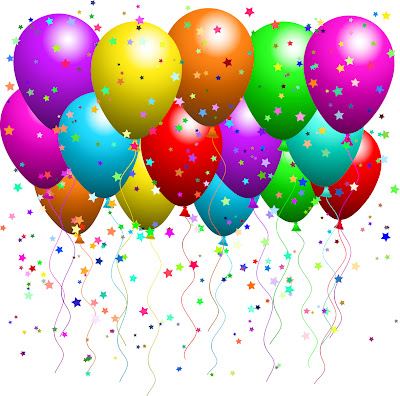 Please contact me: shiehdesignstudio@gmail.com
You have to give me your full name and address so we can get your prize out to you!
If winners do not respond and contact me by end of September 10th, I will have to draw again on September 11th.

Have you heard of Tantalizing Sampler?  It is a site that sells a gift box filled with all kinds of handcrafted products every 2 months.  It is a great idea for both the consumers and small handmade businesses.  Small handmade business like me can join and submit good size samples of the products I make voluntary in exchange for advertising and marketing opportunity.  Consumers can spend almost at cost price to get a mystery box whenever the site is offering, it's a great way for people to try new products they normally would not have a chance to discover.  This sounds like a win win situation.  If you are interested, here's the site: Tantalizing Sampler  Check them out, every box is different.  The next box is October, a great way to preview potential unique handcrafted presents for the holidays coming up.
Why am I blogging about other business?  Well, because I decided to participate in October sampler box myself!  I submitted boxes of trial size cold process soap paired with matching scented lotion, also trial size. 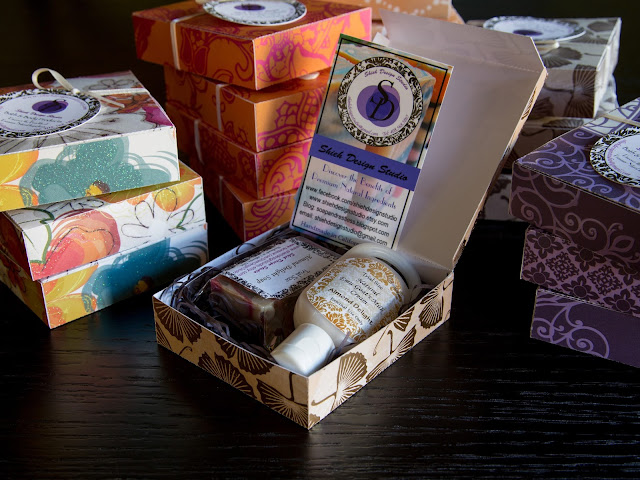 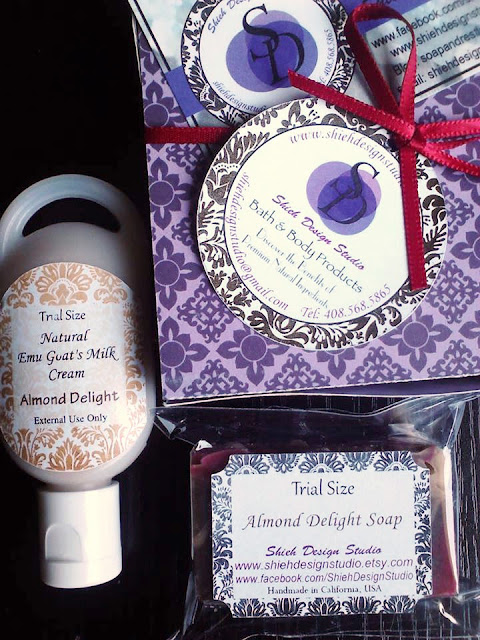 Let me show you the box from August Sampler, beautifully assembled, then shipped to each buyer. 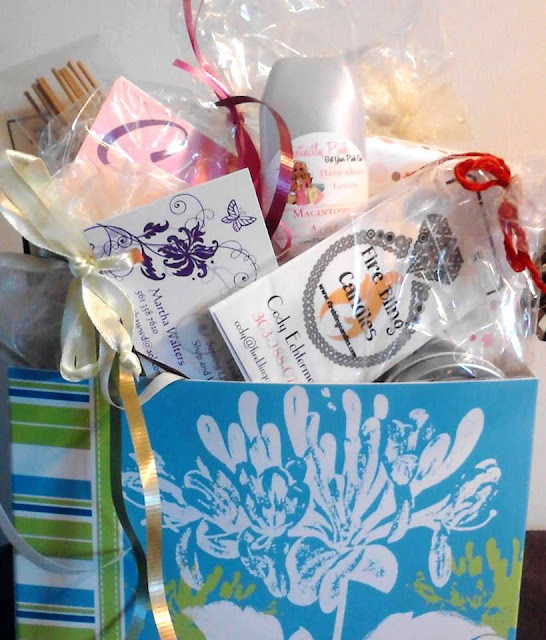 It costed $20 per box for the US customers and $35 per box for international for August box.  This is just to give you a ball part on pricing.  I heard October box is going to be bigger and more grant!  If you are interested, keep you eyes open for the October listing on their web site, you won't be disappointed.