I don't mean the soap looks like porridge, I mean I used it to make soap!
Asian calls it porridge, we eat it for breakfast; western people call it rice milk, I guess it looks white, smushed out just like milk.  Almond blended in water is called almond milk; soy bean blended in water is called soy milk; so of course rice in water is called rice milk, make sense?  I'm Chinese, I call it porridge.  I used brown rice to make porridge using 1:4 rice:water ratio.  It is much harder to cook brown rice into porridge than white rice.  The rice bran refused to soften up even after blending with a stick blender and double cooked.  I debated on filtering the bran out or keep it to soap.  The bran layer is what makes brown rice far more nutritious than white rice but it's also very chewy.  If I included the blended bran in soap it might look like ground oatmeal.  Personally I don't like ground oatmeal in soap, it swells up and becomes mushy in shower.  If I want the benefit of oatmeal I would rather use colloidal oatmeal, which is oatmeal flour.  Anyway, I decided to filter the bran out but was only successful in removing maybe 80%, good enough.  As soon as the lye hit cold blended porridge it burned and curdled into lumps.  It took forever to break all the lumps up and dissolve the lye, it looked yellowish and thick gel consistency. 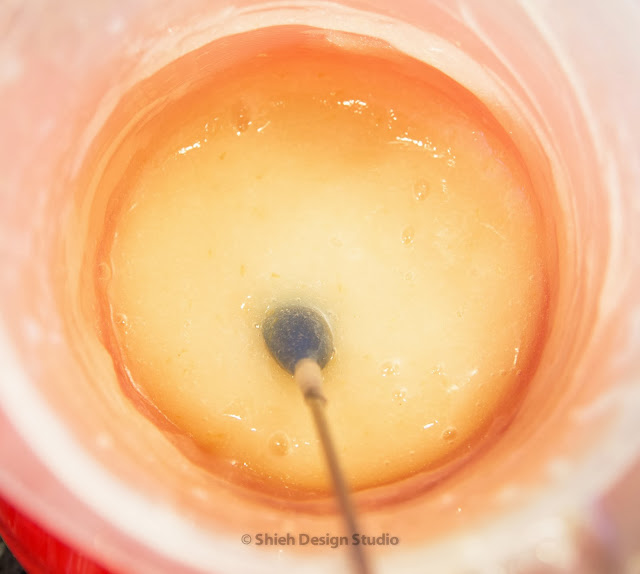 Then as I tried to cool it down with ice bath it clumped up big time! Does that look like pudding or what?! 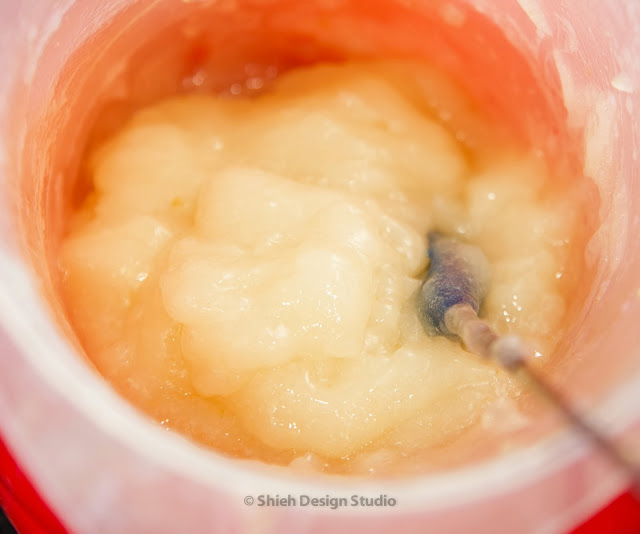 I was worried that I would have a hard time blend it into the oil so I added some more water to thin it down to at least pourable consistency.  Surprisingly I had no problem blending it with oil, no idea if the slow trace was caused by the extra water I added.  I had plenty of time to look for my colorants and fragrance; my initial plan was to make it unscented and uncolored afraid that the porridge would gel up the oil too.  I split it into 2 small batches to make 2 different looks.  I had one done with embeds and simple drizzle top and mica sprinkles.  That was ruined in10 minutes...  My husband came into the kitchen area and accidentally dipped his finger right into the soap... sigh.  This is the fixed version. 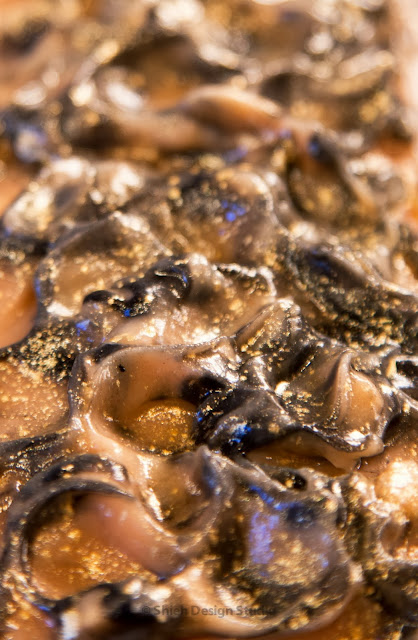 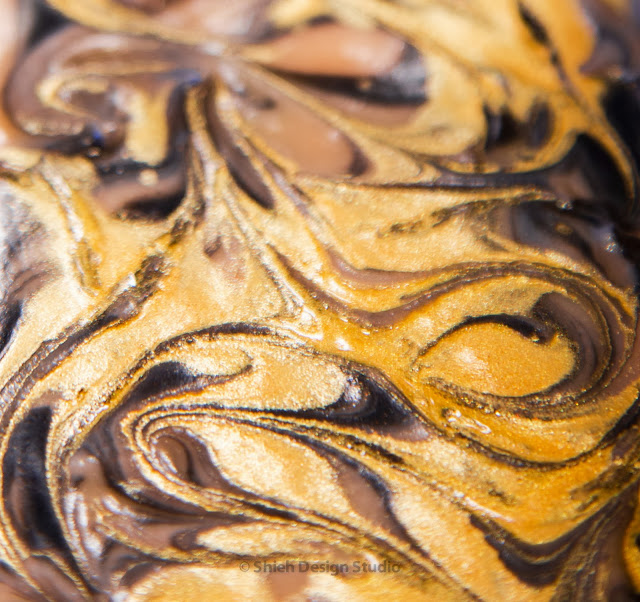 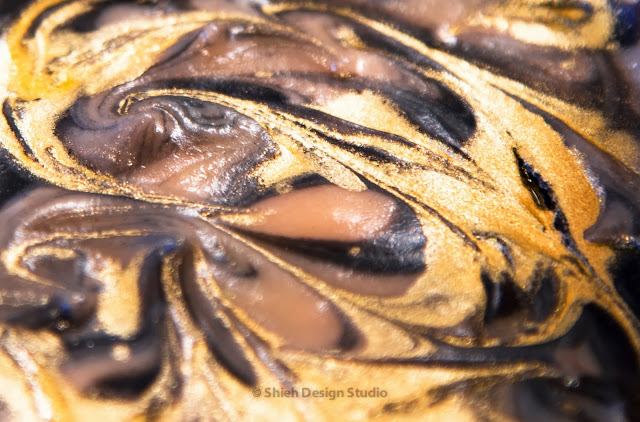 Usually oil mica swirl would leave indentation on the soap top once the oil is absorbed into the soap.  I noticed the water version doesn't make any indentation, just looks like I took a brush and painted it on.
The lather of rice porridge soap reminds me of shaving soap made with bentonite clay.  It doesn't produce pile high foam,  but it's dense and lotion like, slippery almost slimy.  Well, just like the porridge puree!  This could very well be incorporated into shaving soap recipe.
Posted by Shieh Design Studio 2 comments

It's not unusual for people to plan a party and source the party favor a bit too late in the game because it's always thought to be the least important piece of the puzzle.  If you are a cold process soap maker you would understand when I say it takes time to have a custom made soap ready so plan ahead, like 2 months ahead!  Well, but what if it's too late already?  This is where melt and pour soap comes to rescue. 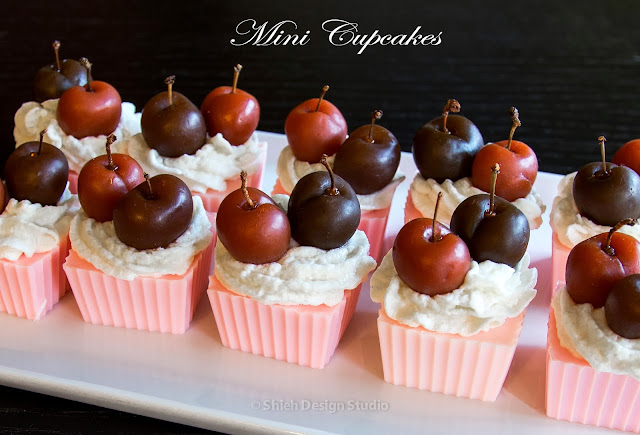 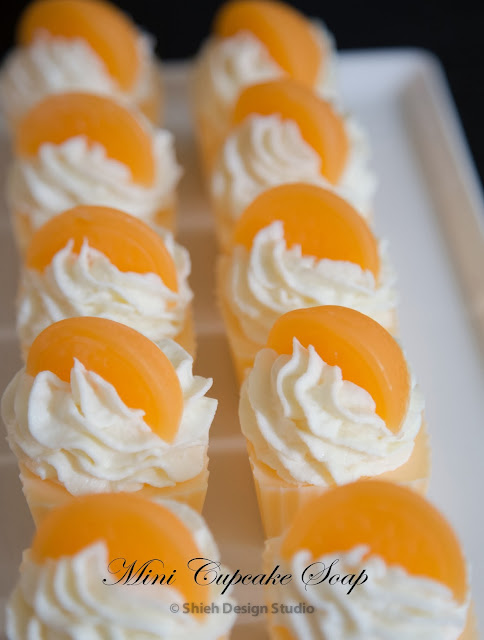 What is melt and pour soap?  It used to be made with detergent and glycerin, can be transparent or opaque, made to be meltable to form whatever shape you want it to be.  Nowadays it can be made detergent free and just like cold process soap but with extra process of glycerin and high % alcohol (or propylene glycol) to turn it transparent and meltable.  Melt and pour soap can be done at home but sure not as cost effective and quality is not as good in my opinion.  Most of us source it from a supplier or directly from a manufacturer.  The advantage of using melt and pour soap is you don't need to wait for cure time like cold process soap.  And if you are not happy with your design you can always remelt it again.  Nevertheless, I still prefer cold process soap most of the time.  Cold process soap allows me to customize recipes and be more flexible with designs.  In my opinion, quality can be far more superior than melt and pour soap. 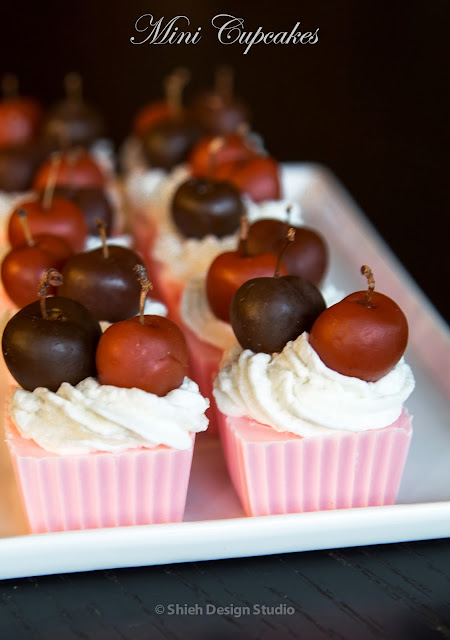 Yes, those cherries are soap, usable soap.  The only thing that's not soap is the stem.  I collected and dried these stems from real cherries thinking one day I would need them.  And I did!  I must be a psychic or something!  The only problem with making soap in the form of food is that it can easily be consumed as food if one does not read the label!
Posted by Shieh Design Studio 9 comments