I'm tired of spending $$$ buying expensive facial products.  I really NEED those potent actives, yes, I'm aging badly!  Time to do some research and source ingredients myself!
As always, the first thing I research is based on natural thickeners.  There are 3 general natural thickener (gelling agent) group in bath & body products: starch, gum, and cellulose.  Gum has the most variations, you can find all kind of different gums.  The most common one is Xanthan gum, it's used widely even in the food industry.  Personally I don't like Xanthan gum, it is hard to mix and gives a somehow sticky after feel.
After researching I nailed it down to testing 2 natural thickeners and one manmade: Sclerotium gum, Hydrocyethylcellulose (HEC), and Carbomer 940. 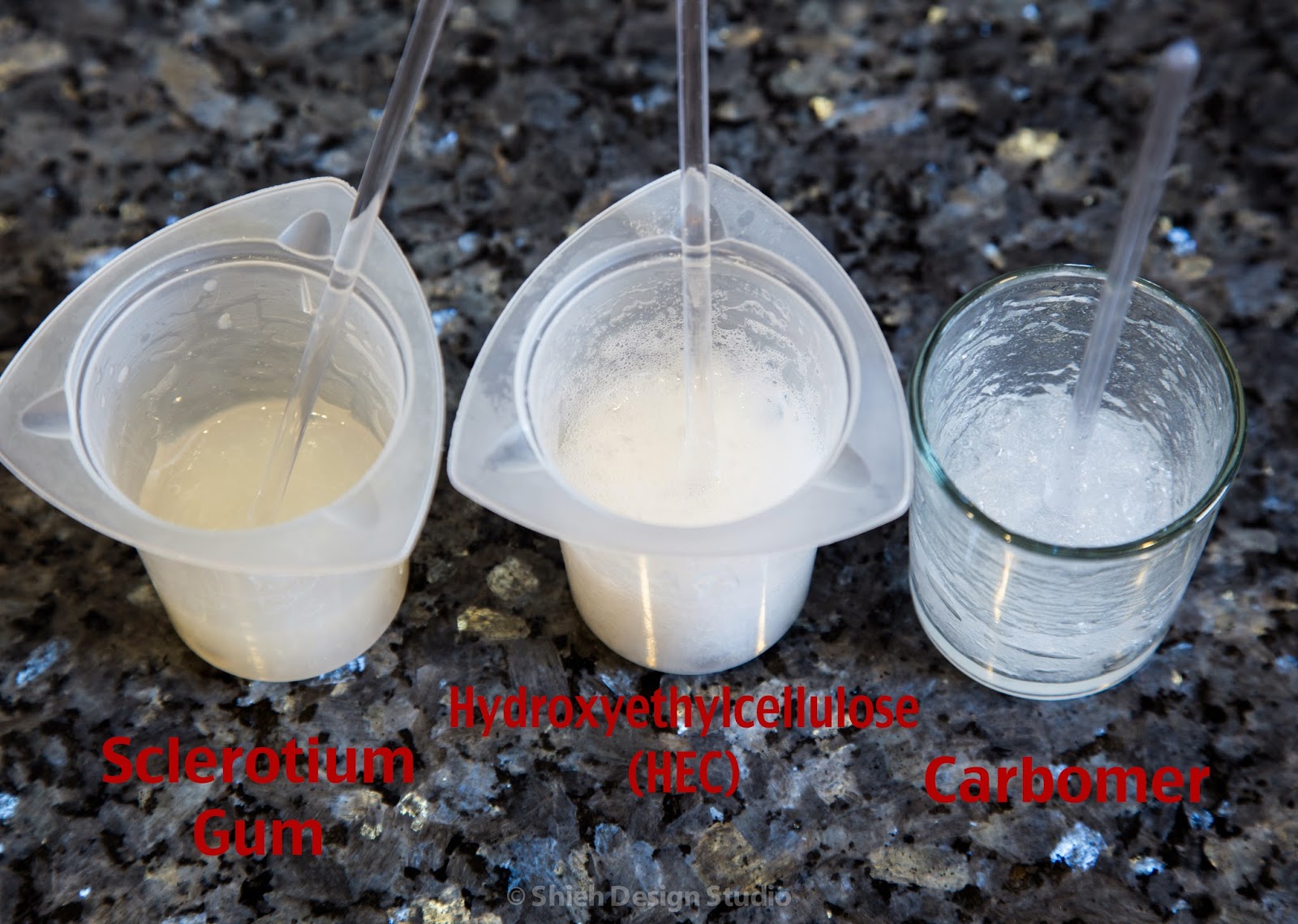 Sclerotium gum is the easiest to mix but it's also the runniest and semi opaque with a yellow tint.  I found no specific instruction of how to mix HEC except it's soluble in water... sigh.  It would not gel when I simply just added in room temperature water.  General rule with natural thickener, heating up usually help.  After I heated up the HEC mix it started to gel, but it gelled in lumps on the bottom.  In the attempt to even out the clear lumps it trapped air into the mix and foam is what I got at the end.  I tried it 2 times, one time mixing with a small frothier the other simply by hand.  Both cases produced foam and stayed foam.  Carbomer 940 performed the best but it's manmade.  It is potent, only a little is needed and it stayed clear and even held the mixing stick right side up 90 degrees!

The next step is to see how emollient (oil) holds up and suspends in the gel formation.  The main goal for this experiment is ultimately to allow me to add extracts and potent retinol (AHA or vitamin A) which is in oil form.  In my test I used Meadowfoam oil, no specific reason, I just like the feel of body products made with it.  I added very small percentage in each gel container and gave a good mix. 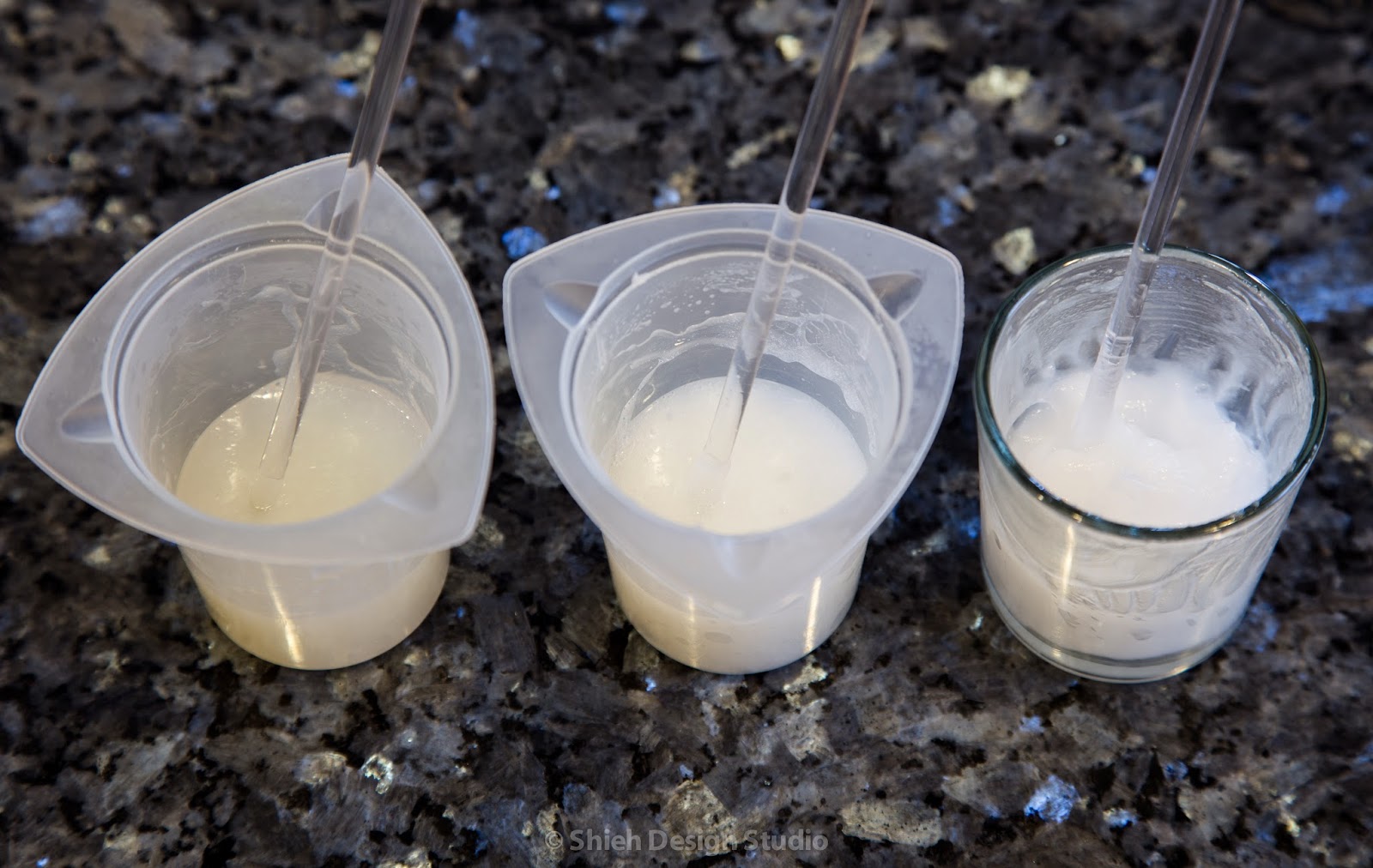 Sclerotium gum mixed very well, thickness stays the same, but separation happened 5 minutes later.  HEC and Carbomer both got significantly thicker, surprisingly, and turned white.  HEC mix became foamy and stiff, but both no separation at all.  I wanted to know how much Sclerotium gum I need in order to keep the emulsification stable so I double the amount.  2 hours later all 3 stayed stable.  Side note, I forgot I have some Maize Thix (modified corn starch) so I tried the same experiment with it too afterwards, but same separation happened.  I guess gum and starch are just not meant for emulsifying water and oil.

Besides the compatibility and stability issue, it's how it feels on my skin that counts.  All 4 test mixes spread easily on my skin.  Carbomer got absorbed slightly faster than all natural thickeners and left no trace.  All natural thickeners imposed slight stickiness and white streaking while applying.  Natural thickeners also left barely noticeable shinny shin (like a film) on my skin when reapplying while Carbomer stays matte.  My conclusion is, I start to wonder why I'm so insisting on using a natural gelling agent.  All the potent actives I plan to use in my facial gel are lab developed anyway.  Natural substance in my opinion is just not as potent in anti-aging field.  What specific potent actives am I putting in my facial gel you ask?  Retinol (best cell regenerator) is one which I already stated above, and others like Hyluronic acid (super hydrator), Tripeptide-5 (collagen booster), and AHA complex (5 different Alpha Hydroxy Acids). Fancy enough?
Posted by Shieh Design Studio