In The Mold Swirling

Typically you do a ITP swirl meaning In The Pot swirl when the raw soap mixture is at the right trace.  But what do you do when you have the mixture over traced but you still want that similar look?
As I'm still in the stage of adjusting myself to get used to using a stick blender to soap, all my batches are over traced these days.  Plus, I poured too hard on the flaxseed oil jug, and ended up having to readjust my double batch recipe into triple batch!  Oh my~  Original plan was only to make a loaf of naked cow milk soap and some Hot Flash Drama Queen shell version.  Well, now I have to quickly think of 3rd loaf idea.  I was not worried because I have so many fragrance oil I have not yet used.  Anyway, milk soap over traced... sigh.  Poured the naked loaf, that was easy, piece of cake.  Moved on to do 4 color shells using those cheap plastic shell sheet molds.  I globed colors into each cavity and swirled each shell with a stick.  And it only took me... forever!  I'll take photos and show you next blog post.
By the time I'm done with those shells (10 total) the remaining raw soap mixture had gone really thick, like gooey taffy or cold cream cheese.  I quickly poured some cold milk into the pot and stirred it down to thinner paste then mixed in the fragrance oil (Blackberry Amber) and colors.  The mixture is thinner but still too thick to do any sort of swirling.  But I wasn't going to give in.  If it's too late to do an ITP swirl, why not modify it to an ITM swirl?!  After random globs of colors at various spots in the mold, I stumped the mold pretty hard against the counter a few times to compact the paste together then used a chopstick to draw random patterns vertically across the mold a few times.  Stumped the mold against the counter again to even out the top, and finally sprayed a shinny layer of rubbing alcohol, done! 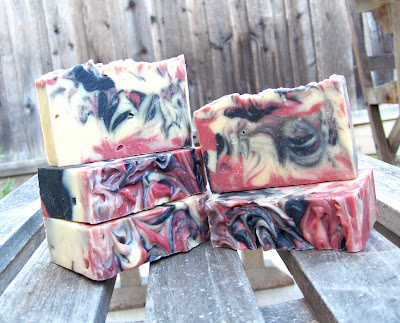 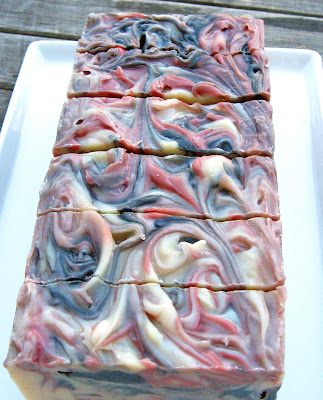 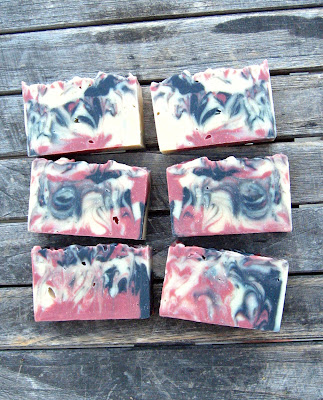