Recap from previous episode: scheduled to pour all 8 mystery fragrances for both CP gel and non-gel testing, took a turn on itself, only 6 survived, 2 casualties!

It's only Episode 2 and this testing already took another turn...  Ready for the drama?!
... instead of forcing to gel in the oven... I actually CPOP them... accidentally...
I have never done forcing gel with these tiny amount so I thought I would heat up the oven to help them out.  And now look what happened!  I "baked" them!  Literally!  LOL  Dessert cheesecake anyone?! 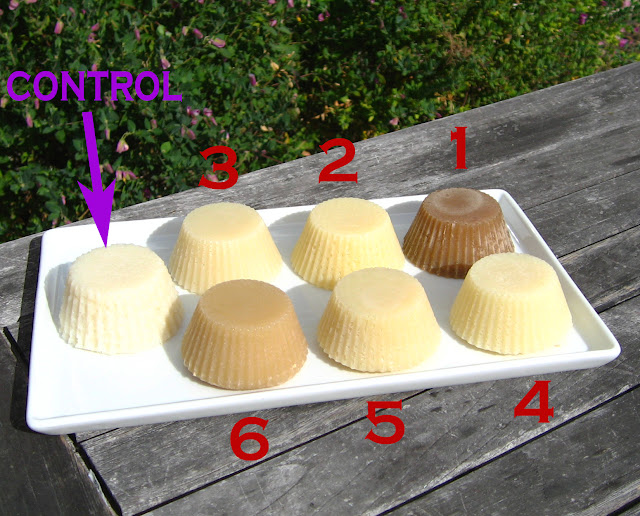 As you can tell, after CPOP the control soap stays pretty much white but the colors of others with fragrance all changed.  #2 & #4 which had no color change when I poured are now beige &  ivory.  #3 did a color change yet again.  It was lemony yellow when I poured, then now same ivory as  #4!  What do you know?!  No surprise to me #1 & #6 turned brown.
When this test is over, I'm going to play dress up with these babies and add a little garnish on top for giveaway.  Tune in for season finale!
And, happy Memorial weekend USA soapers!
Posted by Shieh Design Studio